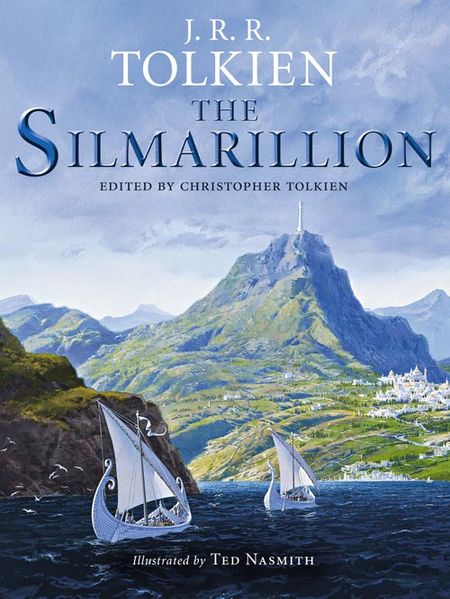 This sumptuous, oversized hardback beautifully presents a revised and reset edition of The Silmarillion, illustrated by way of almost 50 full-colour paintings by celebrated Tolkien artist Ted Nasmith – designed to match and complement the illustrated Hobbit and Lord of The Rings.

J R R Tolkien’s SILMARILLION is the core work of the Middle-earth canon. It is in this dense and often neglected masterpiece that the entire cosmology for the background for THE HOBBIT and, particularly, THE LORD OF THE RINGS is documented.

This revised and reset volume contains fabulous tales of heroes and monsters, and the history of the Elves and of the Silmarils – the magical jewels produced by the Children of Iluvatar, or Elves (humans being the Younger Children of Iluvatar); it tells of the creation of Middle-earth, and the coming of Men into the world; it chronicles the early battles between good and evil, forces of light and dark, which foreshadow the great conflict with Sauron, the Dark Lord, in LORD OF THE RINGS.

These tales of Middle-earth were published posthumously in 1977. Tolkien worked on THE SILMARILLION all his life – long before THE HOBBIT or LORD OF THE RINGS – and his son and literary executor Christopher Tolkien edited the material he left behind into its current form.

With the close collaboration of Christopher Tolkien, THE SILMARILLION has now been completely reset, using the Second Edition text, and redesigned and repackaged to complement the stunningly illustrated hardbacks of THE LORD OF THE RINGS and COMPLETE GUIDE TO MIDDLE-EARTH, providing the reader with a definitive text.

Furthermore, acclaimed Tolkien artist Ted Nasmith has been commissioned to provide 28 breathtaking new paintings, making this new illustrated edition of THE SILMARILLION the most sumptuous and desirable ever published.