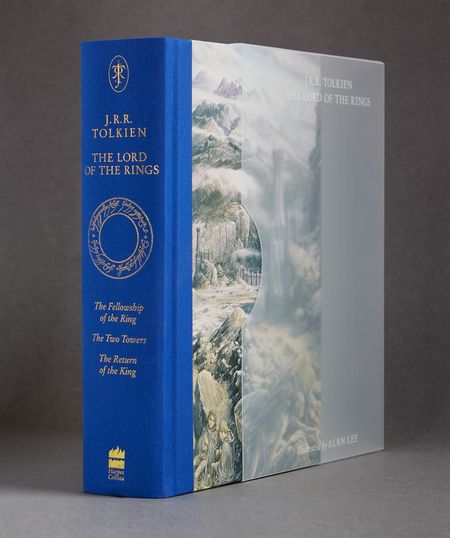 A sumptuous new one-volume edition of Tolkien’s classic masterpiece that is fully illustrated throughout in watercolour by the acclaimed and award-winning artist, Alan Lee, and housed in a special transparent slipcase.

Since it was first published in 1954, The Lord of the Rings has been a book people have treasured. Steeped in unrivalled magic and otherworldliness, its sweeping fantasy has touched the hearts of young and old alike. Well over 100 million copies of its many editions have been sold around the world, and occasional collectors’ editions become prized and valuable items of publishing.

With the epic trilogy now an acclaimed, award-winning and billion-dollar success, images of the characters and landscapes have become iconic to a whole new generation of readers. Much of the look of these movies is based on Alan Lee’s paintings, giving this sumptuous new edition of Tolkien’s great work new relevance for the ever-growing number of fans.

This new edition includes all 50 of Alan Lee’s beautiful watercolour paintings that have been newly scanned by the artist himself, together with his stunning frontispiece painting that appears in full, for the very first time, as a three-page foldout sheet. The text has been reset using the definitive 50th anniversary text and is printed on high-quality paper, and this is accompanied by Tolkien’s own maps, which are printed in red & black as endpapers. The unjacketed book features illustrated boards and includes a silk ribbon marker, and is housed in a special transparent slipcase; together with Alan’s beautiful paintings, this new presentation of this landmark work provides the reader with the ultimate edition with which to celebrate the 60th anniversary of its first publication.