Home » Products » The Legend of Sigurd and Gudrún 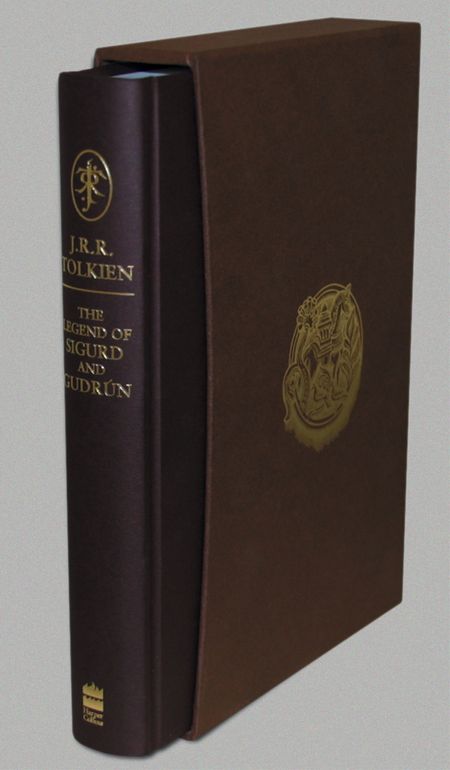 This de luxe collector’s edition features the first edition text and contains a facsimile page of Tolkien’s original manuscript. The book is quarterbound with a special gold motif stamped on the front board and is presented in a matching slipcase.

“Many years ago, J.R.R. Tolkien composed his own version, now published for the first time, of the great legend of Northern antiquity, in two closely related poems to which he gave the titles The New Lay of the Völsungs and The New Lay of Gudrún.

In the Lay of the Völsungs is told the ancestry of the great hero Sigurd, the slayer of Fáfnir most celebrated of dragons, whose treasure he took for his own; of his awakening of the Valkyrie Brynhild who slept surrounded by a wall of fire, and of their betrothal; and of his coming to the court of the great princes who were named the Niflungs (or Nibelungs), with whom he entered into blood-brotherhood. In that court there sprang great love but also great hate, brought about by the power of the enchantress, mother of the Niflungs, skilled in the arts of magic, of shape-changing and potions of forgetfulness.

In scenes of dramatic intensity, of confusion of identity, thwarted passion, jealousy and bitter strife, the tragedy of Sigurd and Brynhild, of Gunnar the Niflung and Gudrún his sister, mounts to its end in the murder of Sigurd at the hands of his blood-brothers, the suicide of Brynhild, and the despair of Gudrún. In the Lay of Gudrún her fate after the death of Sigurd is told, her marriage against her will to the mighty Atli, ruler of the Huns (the Attila of history), his murder of her brothers the Niflung lords, and her hideous revenge.

Deriving his version primarily from his close study of the ancient poetry of Norway and Iceland known as the Poetic Edda (and where no old poetry exists, from the later prose work the Völsunga Saga), J.R.R. Tolkien employed a verse-form of short stanzas whose lines embody in English the exacting alliterative rhythms and the concentrated energy of the poems of the Edda.”— Christopher Tolkien