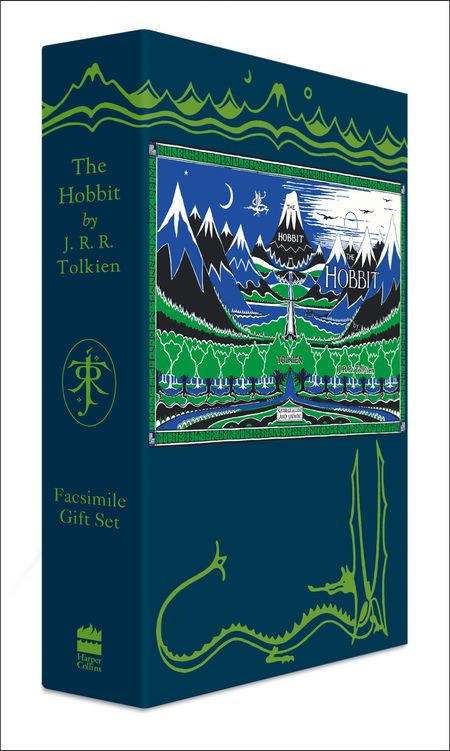 This sumptuous gift set includes a replica of the very rare first edition of The Hobbit, the only edition where one can now read the original version of the story before Tolkien re-edited it to become the one enjoyed by readers since 1951.

The Hobbit was published on 21 September 1937, with a print run of 1,500 copies. With a beautiful cover design, nearly a dozen black & white illustrations and two black & red maps by the author himself, the book proved to be popular and was reprinted shortly afterwards. History was already being made.

The scarcity of the first edition has resulted in copies commanding huge prices, way beyond the reach of most Tolkien fans. In addition, subsequent changes to the text – particularly those to chapter 5, when Tolkien decided in 1947 to revise the text to bring it better into accord with events as they were developing in its ‘sequel’, The Lord of the Rings – mean that the opportunity to read the book in its original form and format has become quite difficult.

This special commemorative gift set includes the first edition, so that readers of all ages – not just ‘children between the ages of 5 and 9’, as Rayner Unwin famously declared in his report on the original submission – can finally enjoy Tolkien’s story as it originally appeared. It also includes an exclusive CD of archive recordings that capture Tolkien reading from The Hobbit, a special copy of Thror’s map which reveals the secret moon-runes when held to the light, and an accompanying booklet that relates the history of The Hobbit, and includes connected writings by JRR Tolkien.