Home » Products » The Hobbit and The Lord of the Rings: Boxed Set 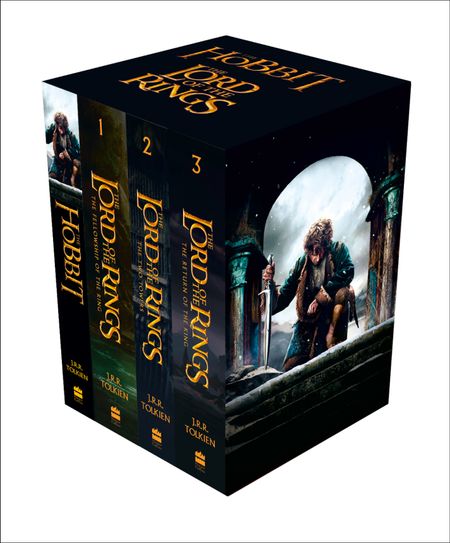 Immerse yourself in Middle-earth with Tolkien’s classic masterpieces behind the films, telling the complete story of Bilbo Baggins and the Hobbits’ epic encounters with Gandalf, Gollum, dragons and monsters, in the quest to destroy the One Ring.

When they were first published, The Hobbit and The Lord of the Rings became instant classics. Treasured by readers young and old, these works of sweeping fantasy, steeped in unrivalled magic and otherworldliness have sold more than 150 million copies around the world.

This new boxed gift set, published to celebrate the release of the first of Peter Jackson’s three-part film adaptation of JRR Tolkien’s The Hobbit, THE HOBBIT: AN UNEXPECTED JOURNEY, contains both titles and features cover images from both films.

It offers readers a new opportunity to discover Tolkien’s remarkable world of Middle-earth and to follow the complete story of Bilbo Baggins and the Hobbits’ part in the epic quest for the Ring – beginning with Bilbo’s fateful visit from Gandalf and culminating in the dramatic climax between Frodo and Gollum atop Mount Doom.